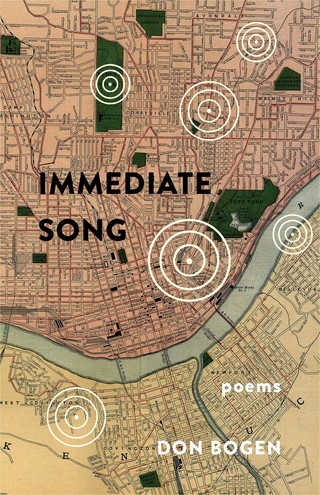 Immediate Song is a book about time, from the immediacy of a moment to the long view of earlier civilizations. It includes street scenes, studies of objects (a mailbox, a vase of flowers, desks), a meditation on life in times of war, a long expository poem on hospitals, and elegies for figures ranging from Charles Dickens and Thom Gunn to the pre-Columbian architects who designed the great earthworks of Ohio two thousand years ago. Songs--brief, lyrical, in time yet also set apart from it--anchor the book in what is both universal and fleeting.

From the elegance of extended discourse to the spareness of song, these poems resonate with exquisite beauty and wisdom.

Simultaneously ambitious and understated, these poems are unmistakably of today's America, even as they mine the timeless concerns of loss and memory.

These are poems of exquisite reproach, and they may well save the day.

Words on a sheet,
screen in a window,
air moving in

where he doesn't move.
Still, in the quick world
he catches the light

as it slices across
the eucalyptus,
spirals of dry green

inscribing the sky.
Morning splits open.
He is taking it in:

smell of spiced dust
sharp in the old smog,
river of traffic

constant and varied,
cool hiss of sprinklers
spurting to life

just now, springs--a back door,
jay's shriek that clears out
all space around it

a moment, a moment.

(Appeared originally in The New Republic)

It's true I lived in the twilight of empire,
the glow at the center already muffled in rumor,
the provinces indistinct, conspiratorial,
alliances like sand falling through the tired fingers of diplomats
while the orators held forth endlessly in the splendor of their halls.
Yet many believed grand days were still ahead of us--
and how, in this, were we different from any age?

There were the usual cabals,
careers to be made among court intrigues
as the wheels of dynasty ground slowly through a calendar of ceremonies.
Slaves peeked out from invisibility from time to time--
an eye, an open mouth, an arm raised then subdued--
and we knew of warrens near the public temples
where plague ruled and flesh was coinage.
But laws and executions gave us a sense of protection,
and there were holidays and amusements,
abundance in the markets for those who had means of exchange,
and tribute still coming in along our fabled roads.

At the outposts, war on small war--
so many, when I think back I lose track of them all:
incursions in the forests, seizures of islands,
fiefdoms defended or toppled among odd sects in the desert.
We took our reports from the centurions
and, when we weren't too busy or tired of it all,
discussed the day-to-day triumphs of the legions abroad.

We knew the most important concerns are close to home.
Our vineyards were narrow but well cultivated,
our marriages reasonable.
Faced with confusion, we were content to wait through it.
We placed our trust in character and good management.
Like others, we had our gods and offerings,
our games of chance, the oracles with their mysteries.
When we thought about the future, we saw our goals
as shimmering ideals, simple and universally shared
except by those who wished to do us harm.
We were a generous people and kept our hearts open.

Appeared originally in The Yale Review

"Immediate Song" and "A Citizen" are read and discussed on the podcast Lit from the Basement, available at the link below:

Lit from the Basement
State of the Union: 50 Political Poems

"A Citizen" is included in State of the Union: 50 Political Poems (Wave Books), available at the link above.

What comes more easily now
than writing to the dead?

(if it were still someone
who could know) consoles,

"You did," "You were" float down
and melt on the closed lids.

The list keeps lengthening.
Name after name, each gets

a shabby vanity
the dark will wash away.

(Appeared in The Paris Review)

"Elegies" was set for chorus by Carrie Magin. A recording is available at the link above.

An Algebra
The University of Chicago Press, 2009
Luster

Musical Works
Poems set to music and collaborations with composers